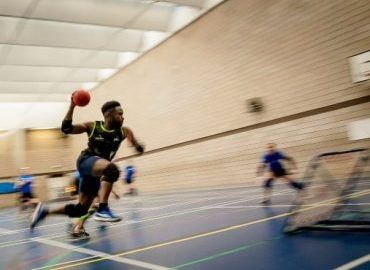 Guildford came out on top in the battle for Super League success defeating Bury Kings in the final round of the season. After 35 minutes of tense tchoukball Guildford’s class came through to make it successive Super League titles.

Going into the final weekend Kings sat top of the division but realistically whoever won the all-important grudge match would take home the title.

The match was a tight affair throughout, level going into the final third. However, with less than half of the final period remaining, Guildford, led by some excellent defensive work by Alex Bromhead, finally maintained a lead, eventually winning 64-57.

Guildford had earlier defeated Guildford Ignite 65-46, building on victories over Portsmouth Drakes and Leeds Galaxy in round three to ensure title success and qualification into the 2019 edition of European Winners’ Cup.

Mack Hofberg, coach of Guildford Tchoukball Club, said: “It’s great to win for a second season. Especially seeing as the standard in my opinion overall in the league has gone up exponentially over the past few seasons.

“This year was less about proving to others that we could compete and more about convincing ourselves we could live up to the reputation we’d made over a relatively short time. For me that’s what tchoukball should be about. This win was all about personal development and I think we’ve come out as better players and smarter, if not battle-hardened, competitors.

For Bury there will be much encouragement from the victory over Guildford earlier in the season, however, they will rue their defeat to Portsmouth Drakes in January having led for much of the match.

Kings did finish on a high, defeating Leeds Galaxy 57-48 to secure second spot and qualification into Silver Cup. In round three Bury defeated Portsmouth and Guildford Ignite.

Portsmouth will join Bury in Solver Cup next year. They beat Leeds Galaxy 57-47 and Guildford Ignite 56-48 respectively.  In round three Drakes lost to Inferno and Kings.

For Leeds their priorities were split between Silver Cup qualification and avoiding relegation. Most importantly they avoided the latter with their win over Guildford Ignite, however defeats to Inferno, Kings and Drakes in the final two rounds means there will be no automatic qualification into next season’s Silver Cup.

While Guildford Inferno were celebrating success, fellow Guildford players from Ignite were considering life back in Division One. Despite an impressive victory over Portsmouth Drakes earlier in the season, Ignite were made to suffer for their defeats to Leeds in the all-important matches.