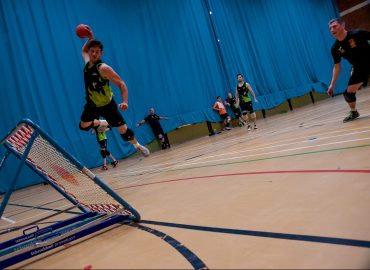 Guildford Inferno won the Domini Fox Memorial Tournament in Portsmouth this weekend but were forced to work for their victory with strong challenges by youth and experience as Bury Kings and Fareham Rhinos pushed them to the limits. Guildford dominated the group stages of the tournament with top team Inferno comfortably winning their group whilst second string Guildford Ignite finished top of their group too.

11 teams made the journey to Portsmouth with French side Tchoukball Normandie and Swiss club Nyon entering teams. Yorkshire club Leeds and Bury St Edmunds from Suffolk joined regular south coast sides Fareham, Guildford, Portsmouth, Portsmouth University and Southampton University. Players got a chance to mix up with friendly matches arranged to even up the group stages.

Group stages proved very tight in Group A with Bury beating Portsmouth and Nyon by a single point before losing to Guildford Ignite in a match that would decide the group. Games were equally competitive in a strong Group B where again the matches were close. Guildford Inferno were comfortable winners in the group with Fareham Rhinos with an average age of over 45 proved very solid in defence finishing second.

Fareham’s second team ‘Orange’ was made up of experienced players and many under 18s and finished 11th overall. Portsmouth University overcame varsity opponents Southampton to finish 9th.

Leeds beat Portsmouth by a point to challenge for 5th place against French team Tchoukball Normandie and with points level at the end of the game, entered an extra time period of 3 minutes. The break in play proved difficult for them and they eventually lost by 4. Nyon beat Portsmouth in the playoff for 7th.

Bury had played the competition a player down with 6 and had defied expectations with 3 under 18s in their side to finish 2nd in their group. They faced Guildford Inferno and it looked on paper like it would be a straightforward win for the reigning Super League Champions. Some powerful shooting from Jack Leitch and quick switching between UK under 18s Sam Clark and Martin Wright saw Bury run Guildford very close, eventually losing 30-32. In the other semi-final, Fareham Rhinos overcame Guildford Ignite to prevent an all-Guildford final. Bury finished 3rd with a narrow victory over Guildford Ignite in the playoff.

Fareham started strongly in the final but Inferno soon established a lead of 5 points with quick switching and a huge range in their placement of shots. Fareham never let the champions get out of sight with Lyall Cairns and Jason Longhurst finding a way through the Guildford defence. However, the clinical shooting of Mack Hofberg, in particular, proved too strong for Fareham eventually with Guildford winning by 5.

Tournament Director Andrew Cummins was delighted with the weekend’s play:

“10 matches were won by a margin of 3 points or less over the weekend. The shorter game format really tested team’s fitness and we had some amazing results this year.”

Operations Director Richard Jackson spoke of some of the challenges of the competition and his hope for the coming year:

“We had quite a few late developments this year and I needed a lot of help to make sure that the competition was a success. We had a great venue for the Saturday evening social where all the teams mixed and I am very hopeful that next year we can build on our increasing network of volunteers to stage something even bigger.”