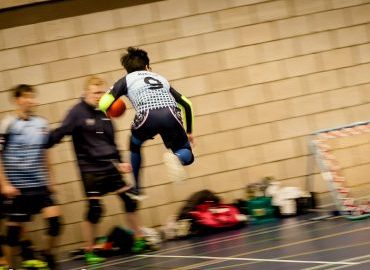 Headingley secured their second Division One title success in three years after a crucial derby win over Leeds. It was a remarkable season that saw just five points separate top from bottom. After four straight wins it looked like promotion was going to be straightforward for Headingley, who were promoted in 2016 before being relegated from the Super League the year after.

However, after losing to both Bury Saints and Portsmouth Uni Pythons in round three and then to Southampton Stags in round four it looked like Headingley were going to be pipped to the title.

Requiring a win, the Yorkshire club managed to defeat Leeds Cosmos 55-49 in their final match to finish on 26 points. Andrew Kinghorn was named player of the match.

Club founder Pete King said: “It’s great to be promoted again. It was an incredibly tough season with the standard of all the teams improving all the time.

“A few years ago we wouldn’t have won some of those games, but through the experience they have gained our players had the edge when needed.”

Second-placed Portsmouth Uni Pythons could have won the title themselves; however, defeat to Bury Saints in the first match of round four gave the initiative back to Headingley. Ending up on 25 points, Portsmouth will feel disappointed to have missed out on their first promotion to the top division.

Pythons had already defeated Headingley, while also managing to edge a 58-57 over Southampton Stags, with Oliver Hughes named player of the match after scoring 18 points.

Stags finished third in the division on 24 points. Stags defeated both Headingley and Bury Saints in round four, but lost to both Pythons and Leeds Cosmos in round three to end their chances of winning the title.

Saints, who started with three defeats and a draw in their first four matches, managed to pick up three wins in their last four matches. Finishing on 23 points, Bury ended with victories over Headingley, Leeds Cosmos and Pythons, the side’s run ended with a loss to Stags.

Leeds ended up on 21 points, including maximum points for their victory over Stags in round three.