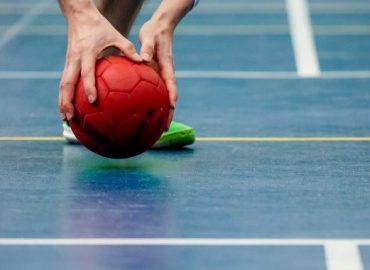 The South-East Regional League got underway at Fareham Academy for the final Sunday of November. Some scintillating displays saw strong starts from Fareham Black and Guildford Inferno as Guildford look to win their third back-to-back regional Division 1 title. In the first round Fareham Black went top with victories against Portsmouth Drakes and Guildford Ignite.

Guildford Inferno started the day slow with a poor first period against Division 1 newcomers Southampton Stags, who began their regional campaign with a brilliant start.

The combination of well drilled defensive positioning and an extensive shooting range from Abs Muhammad saw the Stags hold the reigning regional champs after the first period.

Guildford’s wealth of experience and ability unravelled Stags in the remaining two periods, with a dynamic pairing of Pat Dennis and Rob Ellis undoing the Stags defence with a mixture of acrobatic and aerial shots.

From there, Inferno cruised to a comfortable 59-46 win but a strong start from Southampton Stags nonetheless.

The final game of the day saw Guildford Inferno take on Portsmouth Drakes which always proves to be a competitive affair. No love lost between the two as Inferno started quick with impressive power shooting from Dave Bentley alongside with the finesse precision of Nick Lunn. At the other end of the court, Mike Emery earned his fair share of points with a commendable display.

The tightening up of Guildford’s defence in the final two thirds again began to open the gap, with the match finishing 61-48 to Guildford.

Fareham Black and Southampton Stags both won their games against Guildford Ignite.

Fareham Black and Guildford Inferno lead the table after two games with 8 points, a strong start for Stags on 6 points with Portsmouth Drakes and Guildford Ignite bringing up the rear.

After a convincing start, it’s Fareham Green who sit at the top of Division Two.

Following a walkover against Portsmouth Pingus, by the end of the day, the Greens were raring to go against Southampton Springboks, giving their all and winning 55-38, refusing to let any ball pass them by in the second line.

After losing key players at the end of last season, Portsmouth Uni forfeited their Pingus team this round to field a solid Pythons team. With strong defence and reliable, consistent shooting, they dominated their games, winning 50-34 over Fareham Rhinos and 55-39 over Southampton Springboks.

Southampton Springboks kicked off this regionals round with a team of new players accompanied by Mark Cottee and Paul Brown. They finished in third place with three points after tough losses to Fareham Green (38-55) and Pythons (39-55), but with great performances from the shooters, persevering defence and encouraging potential for the upcoming season.

Fareham Orange made their debut this season in the South East league as a youth girls’ team and also showed a great deal of promise. Despite losing 50-34 to Portsmouth Pythons, the team overcame any initial nerves and worked well together with tight defence and confident shooters. They ended the first round in fourth place with one point, ahead of Portsmouth Uni Pingus on zero.