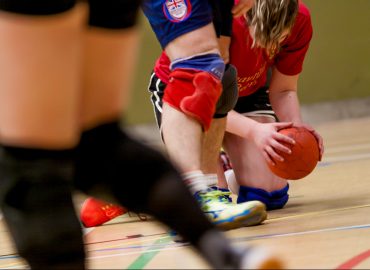 On Sunday 3 November, Tchoukball UK hosted the National League Development Cup – our first development tournament of the 2019/20 season. The tournament is set up to offer match play for a mix of new, developing and experienced players and clubs ahead of the first round of National League on 15 December.

Four teams joined us at Alexander Sports Centre, Bedford for the tournament this year: Bury Kings and Bury Saints from the Eastern Region, Portsmouth Uni Pythons from the South East Region and Yorkshire Outlaws from the Yorkshire Region – as well as a few extra players whose teams were not present.

The morning consisted of 2 x 15 minute games in a round-robin format where the Bury teams boasted a mix of experienced and new players (including a father/son duo), Portsmouth Uni Pythons featured a mix of club and non-club players (who as a team improved massively throughout their matches), and Yorkshire Outlaws who (with many experienced players in their side) were able to take 3 wins from 3 on the day. Overall, all teams did a great job in demonstrating of a range of skills while embracing the spirit of the game (#TchoukballCharter).

In the afternoon, teams were mixed up to provide players the opportunity to compete alongside individuals from other clubs. This is a change in tournament set up from previous years, which offered a great chance to integrate new players. It also provided the opportunity for an all-female team to compete against all-male teams, a rare occurrence in a national tournament.

Development Director, Lisa McCormick had this to say about the day: “The development tournament was a great start to the season, with a number of new players taking to the court in competitive matches for the first time. Due to the unique structure of Tchoukball in the UK, new players often do not play a competitive game before the first round of National League, and it is great that TUK are able to offer such tournaments to its clubs. With some great tchoukball on display it is clear we’re in for another exciting season!”

Teams now prepare for the first round of National League on 15 December – with fixtures to be announced shortly.