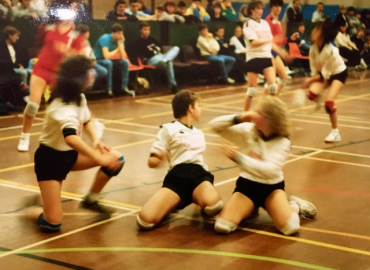 On 10 October, Tchoukball UK joined the marking of World Mental Health Day – an international day for global mental health education, awareness and advocacy against social stigma. Today, we ask you to join us in commemorating Domini Fox, a tchoukball player who lost her fight against mental illness on this day in 1995, and whose memory we honour every year through the Domini Fox Memorial (DFM) tournament.

We are sharing Domini’s story with the help of her sister Jade, who will once again be joining us for the DFM this year to share a few words about her older sister. As a special tribute this year Jade and twin sister Kelly will also be joining the UK Ladies Veteran’s v U18 show game on Sunday 27 October.

Domini discovered tchoukball in Year 7 at Cowplain secondary school in Hampshire. Under the coaching of Keith Page, Domini and her girl’s school team went on to win the Junior European Festival (JEF) and subsequently formed a team to join the Southern Region Tchoukball League (now known as South East Regional League). By all accounts, Domini, who by the age of 16 was selected for the Team UK Ladies team, had got off to a flying start in her tchoukball career. With highlights including two successive tchoukball championships – the 1990 World Championship in Portsmouth, UK and the 1991 European Championship in Le Havre, France – and at home winning the regional league in 1991.

Yet, despite all her success on the tchoukball scene, Jade says Domini was not one for the limelight, “she was a rather shy around people who didn’t know her and would normally go quiet in a bigger group. When it came to tchoukball though, she was always full of energy and passion – loving every minute and attending every training session and game she could.” She adds, “Domini found real comfort in tchoukball and I believe it was a real outlet for her.”

Domini’s passion for tchoukball carried on through her late teens and early twenties, however, in other areas, there were signs of emotional strain. Jade explains: “There were signs that she was struggling, mood swings and self-harm, but at the time there was a general ignorance of mental illness and our belief was that she would grow out of it, that love would be enough.” After sixth form, Domini started university where she was training to become a teacher, but subsequently dropped out, and instead took up a job in a bar.

Domini opened up to her family about her struggles a few months before she passed. But sadly, the young woman who was, according to her sister, “by no means an angel, but truly selfless, always putting everyone’s needs ahead of her own” lost her battle with mental illness.

Jade notes: “What I’ve learned in the years since is that there seems to be a general consensus by people who attempt to or commit suicide that the world is better off without them. This is just not true. There’s just absolute devastation” … “while it is too late for Domini, we know a lot more about mental health today. Hopefully, those struggling with their own mental health, or suspect that someone in their life might be struggling, have the courage to speak up. There are so many ways to get and provide support so make sure you use them.”

This year Tchoukball UK is partnering with Samaritans – a unique charity dedicated to reducing feelings of isolation and disconnection that can lead to suicide. Samaritans is available round the clock, every single day of the year, for anyone who is struggling to cope.

You can call Samaritans for free from any phone on 116 123, email them at [email protected] or visit www.samaritans.org to find details of your nearest branch.