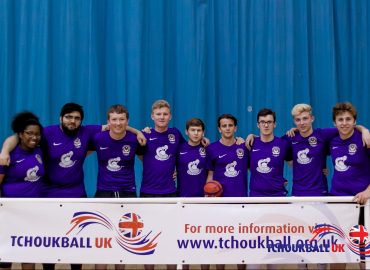 Pythons last saw success with victory in the Pompey Cup in 2012 but led by the shooting of team captain, David Jackson, the side beat Leeds 45-40 in the final.

Earlier in the day the team had seen off a promising looking development squad of Fareham Tchoukball Club, Fareham Orange, with a 57-34 victory.

Leeds’ semi-final was a much tighter affair as they edged out Southampton Stags 49-47.

In the final it was a contest between some of Tchoukball UK Division 1’s top shooters, with Leigh Haw scoring nine and Elle Jones scoring seven for Leeds.

However, the division’s leading scorer David Jackson was in fine form as he scored 17 points, 14 more than any other team-mate, to guide Pythons to victory.

After the match Jackson said: “It was a really strong performance from the Uni [sic] to lead for the whole game, Leeds were very tough to breakdown defensively but some strong shooting and defending helped us seal the result.

“It was the best way for Pythons to finish the season after huge improvements made by everyone. I couldn’t be prouder of the squad for bringing home a deserved trophy after all their hard work.”