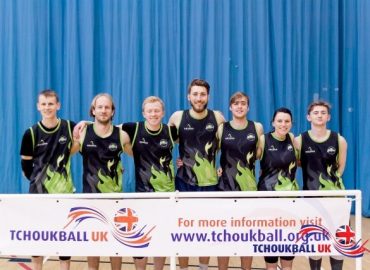 Since its inception Bury Kings had picked up the top tier trophy in Tchoukball UK’s end-of-season finals day, however, Guildford outplayed Bury in a dominant performance to take home the trophy.

After comfortably beating Leeds Galaxy 60-46 in the semi-final, Inferno started sloppily in the final with a run of errors, fortunate that Bury also struggled to find any rhythm.

Bury had on the whole performed well in their semi-final, a closer 60-56 victory over Fareham Rhinos.

Once Guildford reduced its error count, led in particular by the defensive and offensive work of right-shooter duo Rob Ellis and James Skilton, they took the lead, never relinquishing it.

By the break following the second third there was little chance of a comeback for Bury as Skilton continued to score, working well with left shooter Alex Pryor.

The game saw a high number of errors, with both scoring below par, but Guildford’s ability to restrict Bury to only 38 points was telling, with the side eventually winning 51-38.

After their win club head coach Mackenzie Hofberg said: “Guildford is more of a family than a club, we worked hard for each other on court and in training.

“Just three seasons ago we had enough players committed to start weekly training sessions of our own. So fast forward to the cup win where we’ve seen off the reigning champions Bury Kings, it’s just an amazing experience for all of us here at Guildford.”