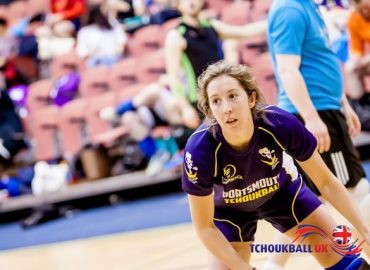 The side, which saw a vast improvement towards the end of the league season, defeated Guildford Ignite in the semi-final 53-43, before a dominant first third secured victory in the final.

Bury had won their semi-final in a hard-fought match against Headingley Outlaws.

In the final Portsmouth started the stronger, making less mistakes and making the most of their opportunities to lead by 9 at the break.

Bury were much much improved in the second third, but were unable to close the gap, and a second surge during the final period following a number of defensive turnover by Jenny Hunt secured a 60-46 victory for Ducks.

Club captain Paul Green said: “We are very proud to have won the Andrews Cup for the third time in a row.

“We have had a rollercoaster of a season with more injuries than we have ever seen, but this saw us come back strong in the later half and really deliver some strong performances.

“Special mention goes to Mike Emery for being an ever present force of shooting and to Danny Austick and Jennifer Hunt for some crucial defensive displays that really bolstered our performances.

“Overall I am very proud of the team and am looking forward to cracking into the top four next season.”

The Andrews Cup also saw the game of the day as Headingley Outlaws were dealt another blow in a difficult season.

The side ended up without a win all season but it looked like they would finally be victorious until the final few seconds of their third-place play-off match against Guildford ignite.

They led by two points with just a few minutes to go but struggled to increase their lead.

With two minutes remaining the game was level and Guildford finally took the lead with less than a minute left on the clock.

A number of Headingley players were left shattered, lying on the ground as the final whistle was blown.