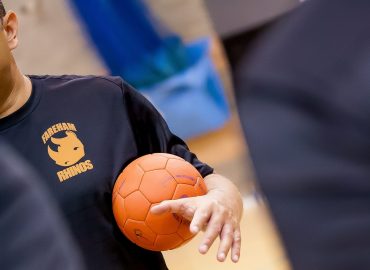 The Domini Fox Memorial Tournament sees the start of the tchoukball season this weekend, with teams from the South East, Suffolk and Yorkshire as well as Switzerland and France competing. The Mountbatten Centre in Portsmouth will see 11 full teams and a friendly team named ‘Brandts’ after the creator of tchoukball, Dr Herman Brandt. The teams are in 2 groups of 6 and fixtures will be published over the next few days.

Tournament Director Andrew Cummins managed the draw process with Richard Jackson, Operations Director, and Liam Green, member of the European Tchoukball Federation Technical Commission overseeing the process. Several rules were in place prior to the draw to ensure that clubs with 2 teams weren’t in the same group. The same rule applied to Nyon and Tchoukball Normandie to ensure an international presence in both groups. First out of the bag were Super League and Super Cup runners-up Bury St Edmunds in Group A. Next out were Fareham Rhinos in Group B.

Leeds Galaxy followed in Group B with Guildford Ignite drawn in Group A. The draw continued with Nyon’s Group A draw fixing the final 2 international sides.

The tournament will run from 09:00 on Saturday 23 September until the end of Sunday afternoon.

Andrew Cummins was very pleased with the number and variety of teams.

“We have a good mix of teams for this competition and we will see a lot of new players and players of differing abilities. The Domini Fox Memorial is a serious event for many teams, but it’s also a great opportunity for clubs to enter new and developing players alongside seasoned pros.”