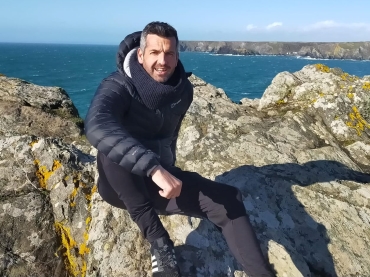 We are very pleased to welcome Stephen Oliver to the TUK family as our new Lead Schools’ Development Officer.

Stephen will work with a growing Development team as he joins forces with our Development Director, Ian Parker, and Independent Director for Development, Lisa McCormick. They look after the development strands of Junior/Team UK and Senior/University, respectively.

As Lead Schools’ Development Officer, Stephen will be responsible for increasing tchoukball participation in schools. Exploring opportunities to provide competitions for school children and connecting players at schools to local tchoukball clubs.

Ian explained the need for this new role: “Having worked within the development of tchoukball for the past few years, particularly looking at getting younger players into the sport and our existing clubs, it became apparent that we lacked the knowledge and skills to target and tap into what is probably our largest pool of players, those playing within schools.”

We advertised the role in January this year and were blown away by the number and quality of the applications we received. Steven secured the role having perfectly demonstrated the potential for tchoukball within schools. Showcasing how Tchoukball UK could provide an offer so these players can continue playing outside of school, including representing Team UK youth squads at international competitions. Lisa and Ian are very excited to start working with Stephen and introducing him to tchoukball and TUK.

As one of our first external appointees, we also wanted to introduce him to you. Thus, without further ado, here’s what Stephen had to say about himself and his future work with TUK ↡

Get to know Stephen

Having lived in Newcastle all my life as a born and bred Geordie, I left to pursue a career in teaching and completed a Primary PGCE in 2007. During this time, I specialised in PE and this led to my first job in teaching in which I became a PE coordinator. Here I developed a great belief in how sport and fitness could inspire and benefit children not just physically but mentally too – the London 2012 Olympics provided a magical experience to inspire and motivate children in the years that followed; it also inspired me to begin to participate in triathlons and up my own physical education! In 2015 I relocated to Yorkshire (my wife’s home county) and this opened up further development of my career: in 2017 I took up a position as an Assistant Head and leader in Maths at a school in Rotherham, which I have held since.

My passion for the use of sport to motivate and inspire children continues, and the opportunity to become Tchoukball UK’s School Development Officer was an opportunity that excited me! It is a privilege to work for a National Governing Body of such a progressive and exciting sport, that places values essential in life at its heart. I am really looking forward to being part of the TUK Team that will establish the sport more widely in schools as an inclusive alternative to more traditional sports with the potential to engage more children in physical activity: it’s going to be an exciting journey!

Hope you all join us in welcoming Stephen and wish him the best in his new role! Our three development leads will be looking to bring interested parties onboard to support in the development of tchoukball, more information on this will follow shortly.