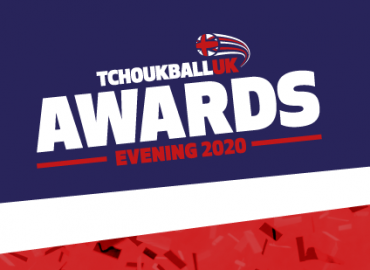 While the tchoukball season 2019/20 might have been cut short, and our road back to tchoukball is not yet clear(…) we felt that this year, more than ever, it would be important to celebrate the achievements of our players and supporters. On Saturday 21 November we invited our members to join us for TUK’s first (and hopefully last, vaccines permitting) Virtual Awards evening.

The evening was hosted by Performance Director Janine Norman and despite the pandemic forcing members to join via a computer screen, spirits were high as the efforts of players and clubs, both on and off the court, were recognised. The evening sported most of our usual awards programme and the addition of some interactive fun – including a photo competition and a special tchoukball quiz.

We were also fortunate to have professional sports photographer Ben Lumley join us as our guest speaker (by pre-recorded video). Ben played tchoukball growing up and was part of Team UK for the World Championships in Geneva, 2000. He has previously photographed our events and hopes to join us for the next European Tchoukball Championships in the UK.

Elle Jones has improved all aspects of her game significantly over the past couple of years. She has demonstrated maturity and more composure in matches as well as worked on her ability to shoot on both the left and the right.
Mari Haugen overcame a significant injury and worked hard on her rehab to get herself into a position to be able to play at the World Tchoukball Championships. Mari is a very powerful shooter and has been a key player for the women’s team in the last few years. She had a good tournament in Malaysia after her injury and started this season very strongly.
– Hannah Norman, Head Coach, Team UK Women

Stu Blakemore has been one of the outstanding performers in the UK for a number of years. Last season he excelled in the national league to help Bury Kings finish as national league champions.
Alongside Stu, Jack Leitch took on the role as Bury’s main point scorer, building on his first caps for Team UK in the 2019 World Championships to win a second league title in a row. He again showed his power but added some new technical shots to his repertoire.
– Ian Parker, Head Coach, Team UK Men

Alex Wolfe made a big step up this year playing in her first competition for the Team UK women’s team, and she did not look out of place at all. That added to some brilliant displays for Fareham Pink meant she fully deserved the Youth Female of the year award.

Sam Bennet was outstanding for Fareham Black and was on of their strongest performers. In the junior trials he showed his quality and level of improvement. It was a real shame he couldn’t play in what would have been his final junior European competition, in which I’m sure his talent would have shone through.

TEAM AND CLUB OF THE YEAR

VOLUNTEER OF THE YEAR: Steph Everitt-Wight

Steph Everitt-Wight, whose two children attended Horndean sessions before the pandemic, was one of those who volunteered to help the new club. Steph sadly died in January but her work and the support of tchoukball was recognised with the posthumous Volunteer of the Year award.

Ian Parker, who coached Steph’s children as part of the Team UK youth set-up, said: “Steph fully deserves this award. I’d only known her and her family since 2018 but she was always a friendly face, wanting only the best for her children and the sport as a whole.  Parents give up so much to support their children. Steph was ever-present, taking both Abby and Lucas to tournaments and to club and UK training sessions across the country, as well as supporting them as they took part in international competitions – this included seeing Abby win the European Youth Tchoukball Championships as part of the under 15 girls’ team in Italy in 2018 and watching on as both took part in the World Championships in Singapore last year.

When you get parents like Steph who take the next step to help support their children’s club, whether that’s taking the money or sitting on club or social committees, it makes a huge difference. I will always remember Steph for her support of her children’s achievements and for her work to support our sport. Her award couldn’t be more deserved and I know her friends and family will be very proud.”

We want to thank everyone who helped us make our first Virtual Awards Evening a reality, from hosts to attendees. We are very much looking forward to seeing our players and supporters back on court and, last but not least, giving our deserved winners their awards in person! ༼ つ ◕_◕ ༽つ 🏆 ☜(ﾟヮﾟ☜)